Come And Join Me In My Creativity Zone

Come and join me in my Creativity Zone where you can enjoy fun and challenging card design ideas that will inspire you to learn new techniques to maximize the use of your craft tools, most especially the Silhouette Cameo machine along with the Silhouette Studio Designer software, and truly enjoy your crafting to the fullest.
All my files are shared for free, ONLY with my blog followers. The files are in Silhouette Studio format. They are for PERSONAL use only and must not be redistributed. You can share by directing people to the link of the project/post on my blog. Thank you for your compliance.

Finally!!! Here is the long overdue promise to post all the information I had gathered regarding the CB09 blade holder, otherwise popularly known as the aluminum blade holder, which is an alternative blade holder for the Silhouette Cameo machine, the Portrait machine and the older model, the Silhouette SD machine.


Although I was perfectly happy with my Silhouette SD machine, I just couldn’t resist the temptation and upgraded to the Silhouette Cameo last November. But before I did, I made sure that my beloved CB09 blade holder will work perfectly well with the Cameo just as it did with my Silhouette SD. I have to admit that I was a bit apprehensive initially even after being assured by a couple of Silhouette dealers but after just one try, my beloved CB09 blade holder was cutting perfectly like butter with my Cameo. Happy dance, happy dance, happy dance!!! 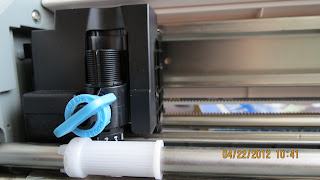 Important tip: I suggest starting with the same amount of blade protrusion (exposure) as with the Silhouette blade at number 3 and start from there. You may need to go a tad more but not a whole lot. The less blade exposure, the better. Take a very close look at the photo below. The Silhouette ratchet blade holder is at a setting of '3'. This is how much blade exposure you would like for the CB09 blade holder for cutting medium to heavy card stock (up to 220 gsm). Once you've determined the accurate setting and are able to achieve the desired clean cuts, you don't ever need to make any further adjustment on the blade depth in the blade holder unnecessarily. If you need to cut different kind of material, all you need to do is adjust the cut settings in the Silhouette Studio program, NOT the CB09 blade holder. If cutting heavier materials, you'll get cleaner cuts by simply checking 'double cut' instead of exposing the blade further out in the blade holder. 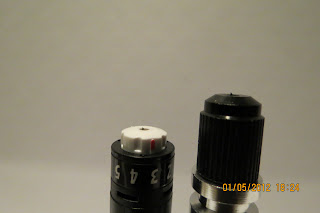 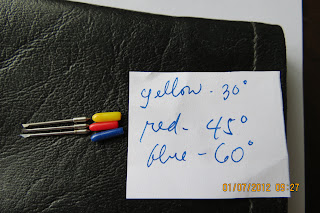 The primary rationale for the the different angles is cutting depth. A lower angle is ideal for cutting thinner materials while a steeper angle can penetrate deeper and is therefore better suited for cutting thicker materials and designs with more detail as the finer pointed tip can easily maneuver the constant curves and turns of an intricate design.

An increased amount of blade dragging through the material when cutting fine detail can cause, what is called, vinyl ears (parts lifted up). With minimal blade in the material, a 60 degree blade tends to cause fewer, if any, vinyl ears. Technically speaking, using a 60 degree blade on everyday cutting is a waste of a blade. Less of the blade's cutting area is used, and blade life is wasted. The more horizontal cutting orientation of the 45 degree blade accurately distributes the cutting task over a larger blade area, and thus lasts longer.

It boils down to how much of the blade edge is in contact with the media. The cutting is either performed by a tiny section of the blade or dispersed along a larger section. The edge of the 60 degree blade is more perpendicular to the media therefore the contact spot on the edge must do all the work which makes the blade get dull a lot faster. The edge of the 45 degree blade runs more parallel to the media and the cutting wear is spread over a larger section of the blade which makes it stand a better chance for smoother cuts.

I only cut regular card stocks so I've only been using the 45 degrees blade.

Unfortunately, the CB09 blade holder does not come with any instructions that's why I made a photo tutorial which I shared on the Silhouette Users Yahoo group. These are exactly the same photos: 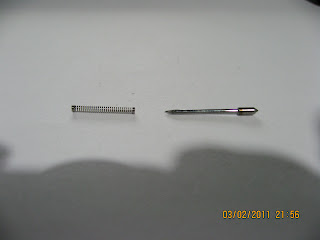 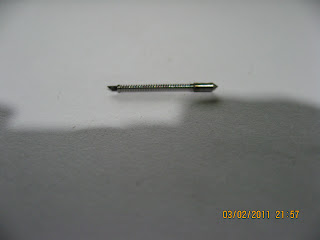 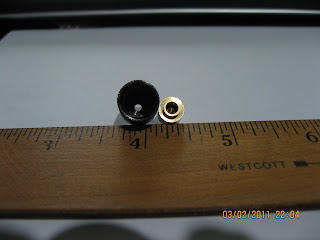 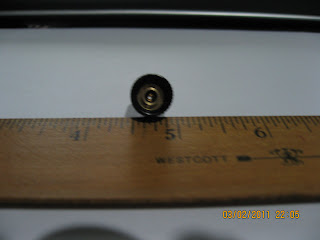 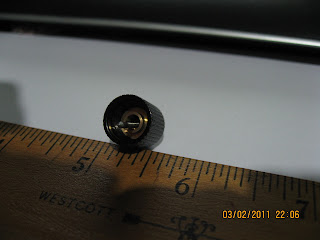 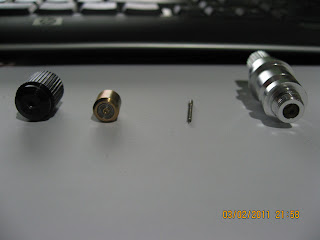 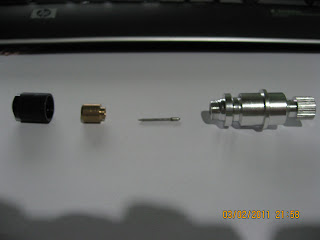 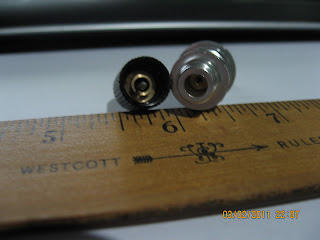 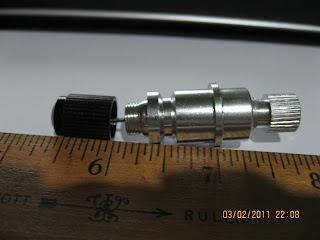 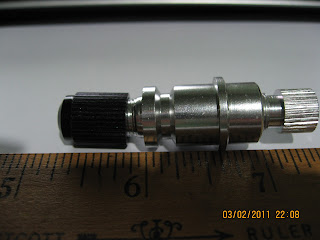 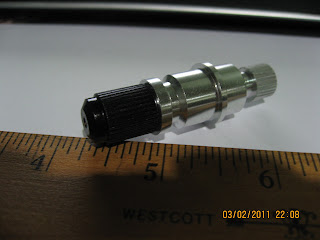 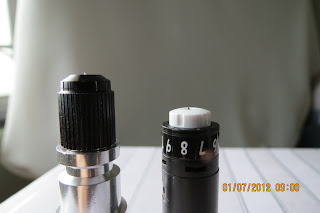 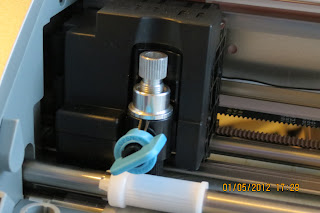 The CB09 blade holder is compatible with all the models of Silhouette machines. Here is a comparison of the cuts between the Silhouette auto blade and CB09 using the Cameo 3:

How to adjust the blade setting for cutting depth:
http://www.youtube.com/watch?feature=endscreen&NR=1&v=Ws7EwSR-Z-Y

***If the 'hand' of your mouse pointer does not appear when you click on the links above, simply select the complete address and right click on your mouse and click on 'go to......'

I bought my second CB09 blade holder and experienced the same problem shared by some users. The blade holder did not go through the slot of the machine as smoothly as it should. The vendor was willing to replace it but he made me try polishing it with a fine sandpaper and that actually solved the problem. Another user form Europe had the same problem which was fixed with the same solution. She posted this on her blog which I posted as a comment to this post to add the link to her blog where she posted photos of the problem and how she fixed it. Another user, a friend of mine, had the same problem, too, and because she didn't have any sandpaper handy, she simply used her nail file (emery board) which worked perfectly.The holder should glide in as easily as the Silhouette blade holder. It should not be forced into the slot. If you encounter the same problem and polishing fails, please let the vendor know and he will replace it.

I just want to share the experience of a new user of the CB09 blade holder, Debbie. I read her comment in the Silhouette Plus Group which had a link to her blog post. Debbie is a great designer and shares her files for free just like I do. She does many great projects and I consider her an authority and value her opinion when it comes to the use of  the Silhouette Cameo machine and the Studio sotfware. She has some valuable information on the CB09 blade holder: http://www.paperpulse.blogspot.com/2013/06/a-better-and-less-expensive-blade.html. By coincidence, her friend, Kim Bell, mentioned on her blog was the same lady from the USA that I helped with her CB09 blade holder. Kim sent me the supposedly CB09 blade holder that she purchased from a supplier in the USA. She was through the roof with her frustration with this blade holder as it would not cut any card stock. When I got the blade holder, I immediately saw that it is not the correct CB09 blade holder. I sent back the holder to her so she can return it to the store. She asked me the favor of ordering the CB09 blade holder for her from my eBay supplier and set it up for her. She sent me samples of card stocks that she uses like Stampin' Up, Recollections and Copic Paper, all of which are very thick, about 220 gsm. The CB09 did, of course, cut all these like butter. See the posted comment of Kim Bell below.

Ideally, you should maintain at least 2 blade holders, one for the 45 degrees blade for cutting regular cardstocks and the other for the 60 degrees blade for cutting thicker materials like the cereal box. This way, you don't need to fiddle with your CB09 blade holder blade adjustment every time you shift between material types. For intricate cuts on regular cardstock, you can simply replace the 45 degrees blade with the 60 degrees blade without the need to readjust the blade setting. If adjustments need to be made, they can be done on your Silhouette Studio cut settings.

Here is an exciting update for CB09 users by Debbie from Paper Pulse Blog. A fellow CB09 user, Pete, shared a wonderful idea on the use of the CB09 on the Silhouette Plus forum. He came up with a template for a numbered settings for the CB09 which is pretty much the same as the Silhouette ratchet blade. He even shared the template which is a Silhouette Studio file which you can download from Debbie's Paper Pulse Blog. I have not tried Pete's idea yet.

UPDATE October 1, 2015 - VERY IMPORTANT UPDATE - No need to polish down CB09 blade holder that won't fit in the Silhouette machine

UPDATE October 1, 2015 - Putting the numbered setting marker on the CB09

You can download the Studio file for the template on the number setting guide for the CB09 from Paper Pulse Blog. Here is a video tutorial:

Please be warned of an incorrect 'CB09' blade holder. I found this video demonstrating the difference between the correct CB09 and incorrect one. I'm aware of the difference in the hole size as someone sent me her blade holder to compare with mine which turned out to be the CB15 based on the much larger blades. The CB09 blades just falls off the hole of the CB15 blade holder. I was not able to measure the hole size. The one with the bigger hole in the video may be the CB15 which has exactly the same appearance as the CB09 and although it can also fit in the Cameo (and Portrait), it won't work as it is meant for cutting machines with so much more powerful cutting force. The correct CB09 blade when fitted in the correct CB09 blade holder is positioned in the center of the hole and although the blade moves around freely, it stays right in the center and will not fall off the holder.


Posted by Gayle Galura-Scott at 9:00 AM

Choose your preferred language in reading my blog:

My Followers - JOIN to enjoy my FREE templates. Just click on 'Join this site'.

Gayle Galura-Scott
I started making cards way back in 1999 when my very close friend, Leila, asked me if I was interested in hosting a Stampin’ Up demonstration party. That started the ball rolling for me and I’ve never given out any store-bought card since then which has been a joy to my family and friends. My craft was elevated to new heights when I bought my Silhouette SD machine just over a year ago. What an amazing digital cutting system! Truly awesome! I used to live in the USA and decided to settle back in the Philippines in 2004. I lived in San Francisco for 18 years, a couple of blocks from the Golden Gate Park. My life in the US was a blast. I had a flourishing career in Finance and was consumed with my work all those years until it wore me out. With enough hard earned savings and enticement from my family, I packed my bags and purchased a one-way ticket to the Philippines. It was such a great blessing to be able to afford to make such a tough decision and enjoy early retirement. And the beauty of it all is the luxury of having a dedicated craft room and having the luxurious time to devote on my crafts along with other personal interests like my charity work.

Protect Design Images With A Watermark